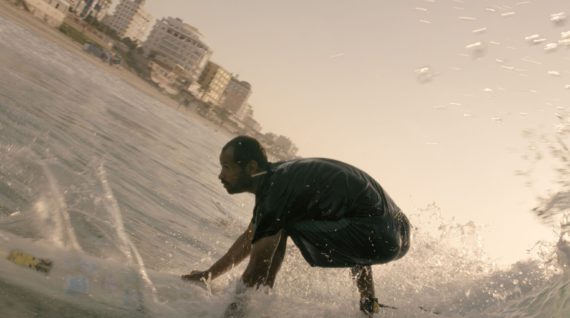 Trapped in the so-called ‘world’s largest open-air prison’, the surfer dudes of Gaza are drawn to the beaches. Sick of occupation and political gridlock, they find their own personal freedom and expression of hope and rebelliousness in the waves of the Mediterranean.

Crammed into a dilapidated car, a group of young men with surfboards drive to the coast through the bombed-out streets of Gaza City. It’s a poignant picture that shows Palestinian youth trying against the odds to do something with their lives. In the documentary we follow Ibrahim (23). He’s dreaming of going to Hawaii to visit his surf buddy Matthew, but first he needs to get a visa. And then there’s 15-year-old Sabah. She’s a talented surfer who’s not allowed in the water without a headscarf, according to Hamas rules. Will these young people succeed in trying to make their dreams come true in the depressing reality of the Gaza enclave?

Director: Philip Gnadt en Mickey Yamine
Length: 87 minutes
Subtitles: English subtitles
Attention: the film starts at sunset (around 9.30 pm)
Rain: If it rains we will screen the film in our (covered!) Genèva Room
On our terrace nice drinks and snacks are sold for during the film.

What others thought of this film

International media has applauded Gaza Surf Club for its ability to show life and desire in the Gaza, without making it political. According to Variety, the film is ‘an inspiring, warmhearted look at a group of resilient spirits who find a way to indulge their passion for surfing while living in the Gaza Strip, one of the world’s most battle-scarred locales.’

According to the knockturnal, the film’s attentiveness to characterization makes the picture to be a touchingly poignant look at the mind’s necessity to deal with hardship in any way possible.

All our Open Air Cinema films

Join the conversation and stay updated at our Facebook event.

A warm summer evening, plenty of drinks & snacks and a documentary you don’t want to miss, that is Open Air Cinema 2017! Every Thursday evening in August a must-see documentary on our outdoor terrace. For five weeks, starting from Thursday 3 August, you can enjoy inspiring, intriguing and ...