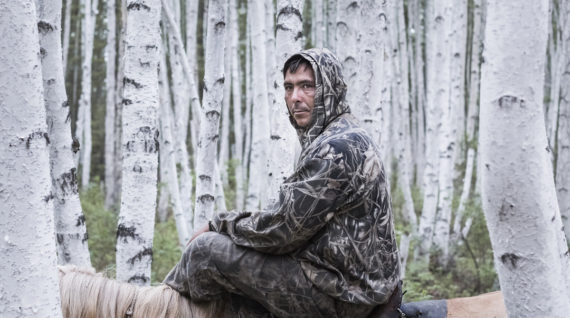 No roads, limited access to electricity and temperatures up to -45 °C. A lifestyle impossible to imagine, but a reality for the 130 inhabitants of Evenkis. In her project Out-of-the-way, photographer Elena Anosova captures this different and islolated lifestyle.

Evenkis is a settlement located in the far north of Russia, near the Nizhnyaya Tunguska River. The closest city is 300 kilometers away. Electricity, which is produced by diesel generators, is only available in the morning and in the evening. In her photo project, Elena Anosova explores the influence of such an isolated way of living on the emotional and social development of people and the relation to their direct environment.

In Evenkis it seems that time has stood still. Change has been subtle. The hunt and fur trade encompasses a substantial part of the local economy. Local legends and traditions play an important role in the community. Anosova paints a picture of a strong community that holds on to its identity in these rapidly changing times. She also refers to her own family story by emphasizing the connection between mankind and nature. She also wonders if this microcosmos can be of value in this age of globalization.

During this edition of Scoop, artist Yair Callender talks with Elena about her project and the story behind it. Musician Rachman from The Hague uses Elena’s photo’s as inspiration.

Scoop stands for showcasing new stories and music. Photographers and musicians share work still in development, letting you see their work in a new way. In each edition, artist Yair Callender talks to photographers from all over the world who address social questions through their photos.

Scoop is a collaboration between Humanity House, Popradar Den Haag and Docking Station.

Elena Anosova is a visual artist working with documentary and art photography, video, archive, and installations. Originally hailing from the region of she is currently based in Irkutsk and Moscow. She is a member of MAPS. She teaches visual arts (Moscow and S. Peterburg) at Rodchenko Art School, School of Visual Arts, The Russian Presidential Academy of National Economy and Public Administration, Academy Fotografika.

Rachman makes music that has traces in folk, blues and soul and drafts inspirations from Stevie Wonder, Bill Withers, The Fleet Foxes and John Mayer. He composes clear melodies with intricate fingerpicking and cinematic lyrics. This results in small songs with big intent, songs that celebrate life. In 2018 Rachman released a four-track EP titled All Of Our Bones which can be found on all the streaming platforms.

Yair Callender is an artist from The Hague. He makes sculptures and other spatial works, some of them monumental and others at the intersection of autonomous work and furniture. Underpinning his art is his exploration of spiritual and symbolic ornaments and shapes. What is the inherent meaning of shapes that go beyond aesthetic value?

Docking Station is a photography platform that aims to charge socially relevant photography projects with new expertise so that they reach a wider audience. It invites young, international photographers to work on their project for a month in the Netherlands and come into contact with a large network of creatives and other experts.

The program is free, but you need to make a reservation to attend.

Scoop stands for showcasing new stories and music. Photographers and musicians share work still in development, letting you see their work in a new way. In each edition, artist Yair Callender talks to photographers from all over the world who address social questions through their photos. Scoop is ...