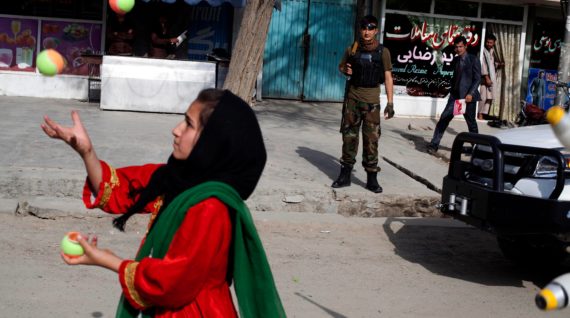 ‘’Laughter is an antidote to war.’’

During this inspirational lunch you can enjoy a delicious lunch and at the same time get inspired by the story of David Mason. In 2002 David Mason left his life in Denmark behind to set up a circus school in Kabul. With his Mobile Mini Circus for Children he wants to give children the chance to learn in a positive way and to find their own happiness.

Thousands of children in Kabul suffer from the traumas of war and loss. How do you bring back joy, enthusiasm and happy memories into their lives? According to David Mason not by focussing on dark, traumatic experiences, but rather by bringing back their faith in their own strengths. At the circus, the children develop their creativity by  juggling, performing acrobatics, and singing.

A few years ago David appeared in an episode of the Dutch television program Floortje to the end of the world. He explained to journalist Floortje Dessing: “You can choose to be negative, and to focus on the pain and problems, and try to resolve it. What we do is the opposite. We discover the positive, and there is plenty of it. We focus on it, we develop it, and it takes over the negative stuff”.

During this lecture David shares his personal experiences and vision on working in Afghanistan with traumatized children. He will be introduced by photographer Thijs Broekkamp, who met David Mason in Afghanistan and made a short film about his work:

You can buy a ticket including or excluding lunch.