Scoop: How do memories shape our fears? - Humanity House
 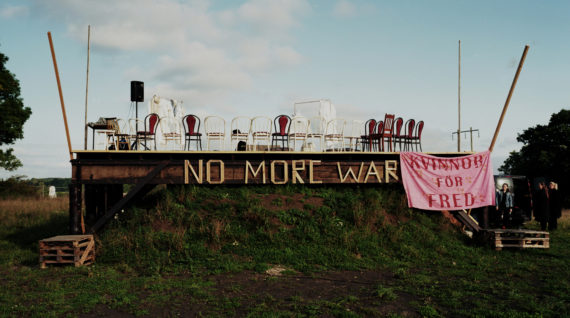 Scoop: How do memories shape our fears?

How do our memories shape our fears? Photographer Loulou d’Aki seeks an answer in Friend or foe and the Eastern sea so green. Artist Yair Callender talks to the Swedish photographer about fear, the idea of freedom, memories and how human beings are conditioned by society.

Loulou d’Aki used to play outside with her grandmother and her sister. Each time the sound of an airplane was heard high above their roof, her grandmother would turn her face up and shout: “The Russians are coming!”. As a child, Loulou never quite understood why her grandmother would think that the airplane flying over their quiet suburb on a Saturday morning, would actually be a Russian one. But the playing stopped for a moment and she realized that her childhood was much different from her grandmother’s.

Friend or foe and the Eastern sea so green is photographic project about the fear of a Russian invasion in Sweden based on the childhood memories of LouLou’s grandmother. For this project Loulou particularly investigated how her grandmother but also generations after are conditioned by this fear. It is based on her grandmother’s personal memories, on historical facts, and on current theories and speculations regarding how Russia might invade Sweden in the future.

A musician from The Hague uses LouLou’s photo’s as an inspiration. The artist will be announced later.

Scoop stands for showcasing new stories and music. Photographers and musicians share work still in development, letting you see their work in a new way. In each edition, artist Yair Callender talks to photographers from all over the world who address social questions through their photos.

Scoop is a collaboration between Humanity House, Popradar Den Haag and Docking Station.

Loulou d’Aki is a Swedish photographer, born and raised on the southern seaside. She is interested in how human beings are affected by the society in which they live, the influence of borders and the idea of freedom. Loulou d’Aki is currently based in Athens, Greece and works all around the world.

NÉOMI is a musician from Rotterdam who makes dreamy folk-pop. She grew up with the record of Bob Dylan and his lyrics are a big source of inspiration for her music. Sonically she is also inspired by artists like Ben Howard and Bon Iver. Her compositions are spatial and mellow with lyrics that tell a story.

Yair Callender is an artist from The Hague. He makes sculptures and other spatial works, some of them monumental and others at the intersection of autonomous work and furniture. Underpinning his art is his exploration of spiritual and symbolic ornaments and shapes. What is the inherent meaning of shapes that go beyond aesthetic value?

Docking Station is a photography platform that aims to charge socially relevant photography projects with new expertise so that they reach a wider audience. It invites young, international photographers to work on their project for a month in the Netherlands and come into contact with a large network of creatives and other experts.

Entrance is free, but a reservation is mandatory due to limited seats available.

Scoop stands for showcasing new stories and music. Photographers and musicians share work still in development, letting you see their work in a new way. In each edition, artist Yair Callender talks to photographers from all over the world who address social questions through their photos. Scoop is ...