Wars, other violence and persecution drove worldwide forced displacement to a new high in 2017 for the fifth year in a row, led by the crisis in Democratic Republic of the Congo, South Sudan’s war, and the flight into Bangladesh from Myanmar of hundreds of thousands of Rohingya refugees.

In its annual Global Trends report, released on 19 June, UNHCR, the UN Refugee Agency said 68.5 million people were displaced as of the end of 2017. Among them were 16.2 million people who became displaced during 2017 itself, either for the first time or repeatedly – indicating a huge number of people on the move and equivalent to 44,500 people being displaced each day, or a person becoming displaced every two seconds.

The figure of 68.65 million comprises three important components. First is displacement of people inside their own countries, whose numbers were 40 million at the end of 2017. Second is refugee numbers, which at 25.4 million are the highest ever seen. Third is asylum seekers, people who have fled their country and are still awaiting the outcome of their claims to refugee status.  At of the end of 2017 the number of people seeking asylum globally was 3.1 million.

53% of the world’s refugees ar children,  including many who are unaccompanied or separated from their families. Two thirds from all refugees come from just five countries: Syria, Afghanistan, South Sudan, Myanmar and Somalia. An end to conflict in any one of these has potential to significantly influence the wider global displacement picture.

85 percent shelter in the region

The report offers several insights, including in some instances into perceived versus actual realities of forced displacement and how these can sometimes be at odds. Among these is the notion that the world’s displaced are mainly in countries of the Global North. The data shows the opposite to be true – with fully 85 per cent of refugees in developing countries, many of which are desperately poor and receive little support to care for these populations. Four out of five refugees remain in countries next door to their own.

The number of countries hosting the large numbers of refugees was also comparatively few. In all, 63 per cent of all refugees were in just 10 countries. Turkey remained the world’s leading refugee hosting country in terms of absolute numbers with a population of 3.5 million refugees, mainly Syrians. Lebanon meanwhile hosted the largest number of refugees relative to its national population. 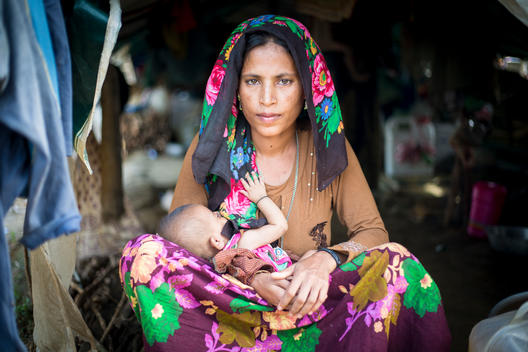 Sadly, solutions for all this remained in short supply. Wars and conflict continued to be the major drivers with little visible progress towards peace. Around five million people were able to return to their homes in 2017 with the vast majority returning from internal displacement, but among these were people returning under duress or to fragile contexts. Due to a drop in the number of resettlement places on offer, the number of resettled refugees was down by over 40 per cent at around 100,000 people.