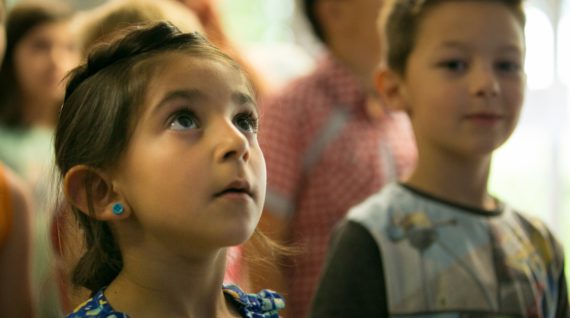 A heart-warming documentary about the kind of teacher you‘d wish for every schoolchild. Miss Kiet teaches children of asylum seekers. Coming from countries like Syria and Iraq, they have all been through a lot. Fortunately, their teacher is Miss Kiet – strict but fair, patient, kind and concerned. She teaches them Dutch and shows them how to help each other.

The documentary makers filmed everything from the perspective of the children. This gives us an unique insight into the experiences of children, who just arrived in the Netherlands: little Leanne, traumatized Jorj, feisty Haya. Not only in the classroom, but also during recess, out of the teacher’s sight. The result is moving, often funny and sometimes sad, but most of all it gives cause for hope.

Prior to the movie miss Kiet will personally present a column.

Director: Peter Lataster and Petra Lataster-Czisch
Length: 115 minutes
Subtitels: English subtitles
The films are screened by Solar Cinema, the first and only Dutch solar powered mobile cinema.
Attention: the film starts at sunset (around 9.30 pm)
Rain: If it rains we will screen the film in our (covered!) Genève Room
On the terrace there are also drinks and snacks available for during the movie!

What others thought of this film

Miss Kiet’s Children is internationally and nationally applauded. The film won several prizes, among which the Directors NL Award: Best Documentary 2016, Doxa Vancouver: Honourable Mention and Do.Fest München: Auience Award. The Guardian reviewed the film with four stars. According to Holywood Reporter it is one of the year’s truly outstanding European documentaries.

All our Open Air Cinema films

Join the conversation and stay updated at the Facebook event.

A warm summer evening, plenty of drinks & snacks and a documentary you don’t want to miss, that is Open Air Cinema 2017! Every Thursday evening in August a must-see documentary on our outdoor terrace. For five weeks, starting from Thursday 3 August, you can enjoy inspiring, intriguing and ...