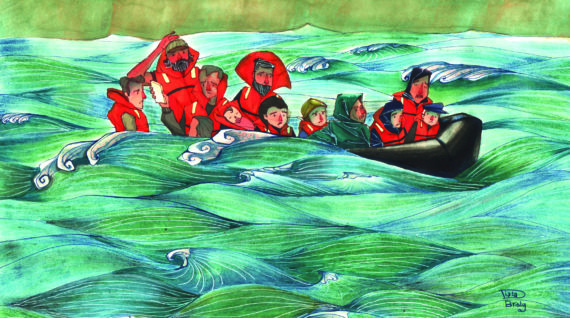 On 15 March 2011 the demonstrations in Syria started. With the unique exhibition Cartooning Syria we look back on 8 years of protest and war in Syria. You will see printed cartoons and original cartoons in large format and projections of hundreds of cartoons from 39 artists.

Some still date from the early days of the protests in 2011. They show you a personal and political picture of the uprising and war in Syria through the eyes of Syrians. About the regime of President Bashar al-Assad, political background, violence, refugees and victims.

Most cartoonists have fled their country, especially after the cartoonist Akram Raslan was arrested in 2012 and murdered in prison in 2013. They now live all over the world, from Australia to the north of Norway, from Western Europe to Canada and the United States.

Some cartoonists still live in Syria, Damascus and Aleppo, where the current regime of Bashar al-Assad is in charge and also in the province of Idlib where all the rebels have been transported to.