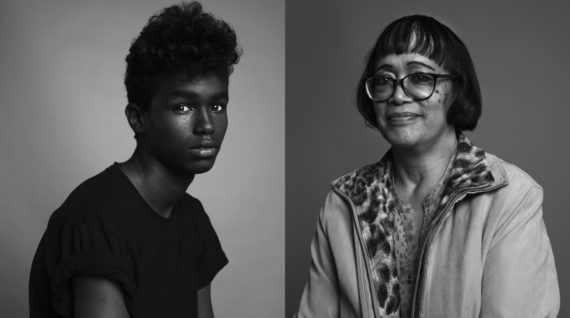 In Studio Aleppo [The Hague], fifty inhabitants from The Hague introduce themselves to you. Some of them are newcomers, while others have lived here for a long time. All have had their picture taken by renowned photographer Robin de Puy.

Studio Aleppo: Picturing (New) European Citizens is a project by Paradox, in which pop-up photography studios are set up in various European cities. In each city, newcomers and ‘established’ residents are invited to have their picture taken by a prominent photographer. The neutral setting of the photography studio negates the differences between the two groups. All the people portrayed present themselves as legitimate and equal citizens of the city.

After successful editions in Amsterdam and Helsinki, and with an upcoming edition in Berlin, it is now the turn of The Hague. In the weekend of 16-17 September 2017, Humanity House transformed into a pop-up photography studio. Here, renowned photographer Robin de Puy photographed fifty residents from The Hague. In addition, the people portrayed were interviewed about their ties to the city.

The idea for Studio Aleppo arose when the Syrian photographer Issa Touma found among the ruins of Aleppo the archive of a photography studio, containing (glass) negatives and small prints made between 1920 and 1970. They constitute a painful reminder of the inhabitants who fled, who were injured or killed, or who remained behind despite everything. We can only guess at the story behind each picture. Issa Touma has brought the negatives to the Netherlands, and Paradox has used them to develop the concept for Studio Aleppo.

Robin de Puy (Oud-Tonge, 1986) is one of the Netherlands’ most popular portrait photographers and the current ‘national photographer’. Her career took off immediately after she graduated from the Fotoacademie Rotterdam. Her Girls in Prostitution series won her the Photo Academy Award for the best final year project of 2009. In 2013 she won the National Portrait Prize. Her work is published in a number of national and international magazines, including New York magazine, Bloomberg Businessweek, ELLE, L’Officiel, Volkskrant, LINDA and many more.