Dare to Dream: five years after the attack on the Yezidi-community - Humanity House
 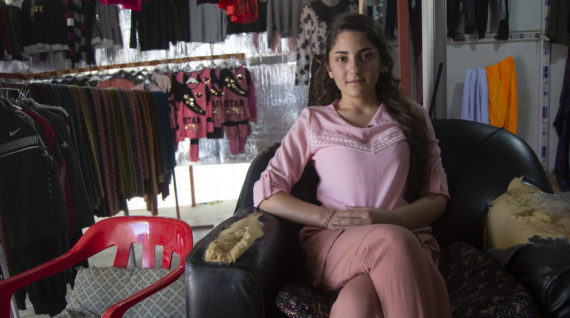 Dare to Dream: five years after the attack on the Yezidi-community

Looking to the future takes courage. This is the message that Hivos wants to share with the new photo exhibition ‘Dare to dream: Five years after the attack on the Yezidi-community’.

On 3 August, it will have been five years since the Yezidi community was attacked by Islamic State (IS) in northern Iraq. Thousands of women and children were captured, trafficked and abused. Many of these women have now been freed or escaped, but they are still stranded in refugee centres in the region. Often they cannot return to their villages, which have either been destroyed or are unsafe.

Hivos wants to highlight the plight of these women with the photo exhibition ‘Dare to dream: Five years after the attack on the Yezidi community’. The images convey the survival power of the women still living in camps, but who cautiously dare to think about the future again. One of them is Iman Ido. Captured by IS when she was ten, she now dreams of becoming a lawyer. Another woman is Layla Taalo, who has written down her story so that she can deal courageously with her past.

Hivos is working in Iraq with EMMA, an organization that provides help to more than 600 Yezidi women in refugee camps around Erbil and Duhok.

On Saturday 3 August, Hivos is organizing the Hague Talks, with remarkable testimonies from these women. You can sign up here.

Iman Ido was captured by IS when she was just ten years old. She managed to escape after three years. Iman now works in a clothes shop in the refugee camp, but she has bigger ambitions: “I want to be a lawyer, to stand up for the rights of the Yezidis and take on IS.”

Seivan M. Salim is a photographer from Duhok (the Kurdish region of Iraq) and has been documenting human rights violations of women and girls for many years. Since the fall of IS in Iraq, Seivan has focused on the stories of Yezidi-women and -girls. She draws attention to the needs of these women and calls on the international community to take action. Seivan’s work has been published in several major international media, including National Geographic, Le Monde, The Guardian, Sunday Times and Daily Mail.