Where will we go? - Humanity House
 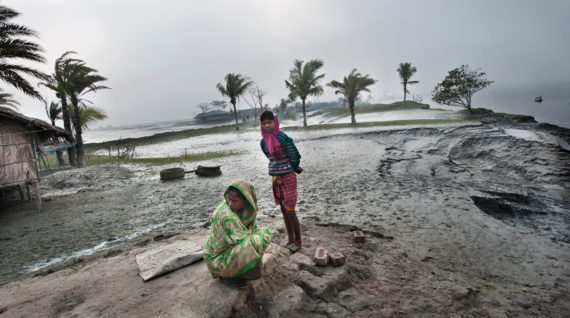 Where will we go?

In October and November we present the exhibition Where will we go? by photographer Kadir van Lohuizen. Not on our own walls in the Humanity House, but on the boulevard of Scheveningen! For this impressive exhibition Van Lohuizen traveled the world to record places where the effects of climate change are already tangible.

Due to climate change, glaciers all over the world are retracting and the ice of Greenland and Antarctica is melting at an increasing pace. To date, the main reason has been expansion of seawater due to warming of the upper kilometer of the ocean. Coastal erosion, inundation and much more frequent coastal surges mean that people have to flee their homes. It has been estimated that between now and 2050, tens of millions of people will have to relocate to higher ground. Nobody knows where they will go.

Take for example the archipelago Kiribati in the Pacific Ocean. The entire population of Kiribati, about 114.000 people, will have to relocate because of the rising sea level. Or look at the east coast of the United States: it is experiencing a sea level rise which is three times higher than the global average. It is predicted that places such as the Miami Beach area will need to be evacuated by 2060. Should we be preparing for the biggest displacement of mankind in known history?

Where will we go? provides visual coverage of how climate change is already affecting places where people live. The pictures show Greenland, Fiji, the Carteret Atoll in Papua New Guinea, Bangladesh, the Guna Yala archipelago in Panama, the United Kingdom and the United States. The exhibition shows people who still live in affected areas, but also those who have already moved to safer ground. The exhibition highlights both the immense complexities associated with the forced displacement of people, as well as the human rights implications.

The exhibition is on show at the boulevard of Scheveningen near the statue Vissersvrouw van Scheveningen up to beach pavilion Veronica.

Dutch photographer Kadir van Lohuizen (1963) has covered conflicts in Africa and elsewhere, but is probably best known for his long-term projects on the seven rivers of the world, the rising of sea levels, the diamond industry and migration in the Americas.